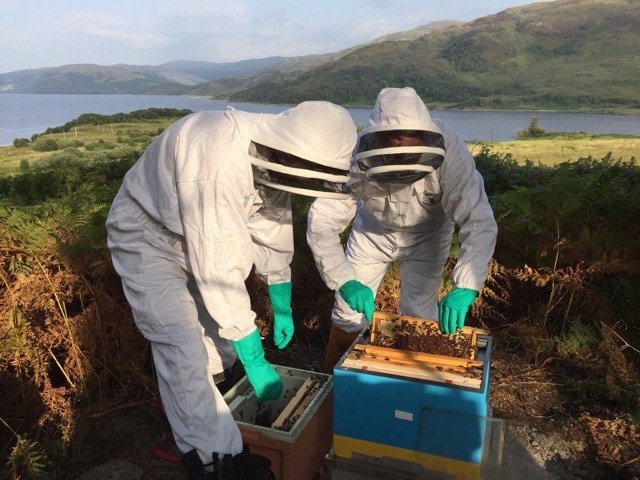 Honey bees worldwide are in serious and worrying decline due to the combined effects of climate change, the varroa mite and pesticide use. Their susceptibility in the UK comes principally from the fact that most honey bees in the UK are from imports of Southern European honey bees after the decimation of our native stocks in the early 20th century. Compared to the native ‘Dark’ or ‘Black’ northern European honey bee these are less well adapted to our climate and less proficient in gathering and using food making the colony less able to survive the hard winters and threat of disease. There is now a serious push to bring back the Black Bee – Apis Mellifera Mellifera (AMM) in the UK starting with remote areas of Scotland as these have surviving historical colonies and can more easily avoid the threat of hybridisation with other non-native colonies.

One of the centres of this effort is located just north of Carna in the form of Ardnamurchan Native Black Bee Project run by Kate Atchley of Sunart Ardnamurchan Morvern and Moidart Beekeepers Association (SAMMBA). Kate is an experienced queen breeder and her project has just received lottery funding to expand their queen rearing programme and local volunteers in keeping black bees. As of August 2016 the project has now expanded onto Carna with the establishment of two colonies of AMM bees on the island with plans to grow gradually over time.

Want to help us make this happen? If you would like to support us and SAMMBA in breeding more native honeybees project a donation of any size would go a very long way

and be very gratefully received. You can donate via paypal or card by clicking the link below.

Any donation over £20 will receive a personalised gift certificate but for £100 you can sponsor one side of a hive which will be decorated with the name of yourself, your family or your business for all our visitors to see and admire your contribution!