The Isle of Carna. Your Private Island Paradise.

Carna is a small island lying in Loch Sunart, nestled between the Ardnamurchan and Morvern peninsulas on the West Coast of Scotland. Although now a place known for its peace and seclusion the island is packed with history stretching back to being formed up to a billion years ago! The island is a 600 acre mosaic of wildlife rich habitats including traditional wildflower meadows, Birchwood, Pinewood and internationally important Atlantic Oakwoods, heather moorland, peatland, hill grazing, many burns and some bogs. All of which is open to explore to our guests and visitors.

There are only 3 houses on the island, two of which are open to guests, located on the gentle and sheltered eastern side. With no roads on Carna and just an old land rover to help move luggage and supplies, there are no traffic worries, and the sounds of the shore, the sea breeze and our abundant wildlife is all that you have to contend with. You can scale the 170m (550ft) summit or explore the numerous ridges, gullies, secret woods, coves and beaches via a network of tracks and trails most of which are rarely visited by human footsteps. Enjoy a sundowner from the top and admire the commanding views onto the neighbouring lochs, peninsulas and the open Atlantic Ocean.

The island was a busy place up until more recent times serving as a bit of a ‘hub’ and almost a bridge between Ardnamurchan and Morvern when virtually everything went by sea due to the lack of roads. Carna being a relatively large area of flatter more cultivable land in the vicinity had a fair population with up to 17 households recorded in the 1850’s growing crops, keeping livestock and fishing to survive. You can still see the remains of a tidal fish trap on the east side of the island.

The island was originally part of the Kingdom of Dalriada which in the late 6th to early 7th century covered roughly the west coast of Scotland and Ulster in Ireland. Then came the invasion of the Vikings beginning in 795 AD who went on to control from Shetland to the Isle of Man to the east coast of Ireland. This rule by waxed and waned until it was decisively seized by Somerled in 1156 and evolved into the hybrid Norse-Gaelic dynasty of the ‘Lordship of the Isles’. This realm was under the nominal overlord of the King of Scots but in reality functioning with complete autonomy. The Clan Donald emerged as the ruling family of this lordship and the clan gathered on Carna prior to the battle of Inverlochy in 1431 where they were victorious against the royal army. After the discovery of a plot with the English against the Scottish crown, the title and estates were forfeited to the Scottish king (the title now being held by Prince Charles). However, not everyone accepted this, including Domnhall Dubh a grandson of a previous lord, who with the backing of England began to lead an insurrection from Carna in 1543 to regain the Lordship. Alas he died two years later so was not successful.

The island then belonged to the Duke of Argyll until the 18th century, changing hands several times until it was purchased by the Canon Newton in 1881, whose descendants the Milward-Towers family still own it today.

Much archaeological work continues to be done on this area of Scotland discovering the lives of the early peoples and their transformation from hunter-gatherers to farmers (4,000-8000 years ago).

The Ardnamurchan Transitions Project has excavated many sites of interest locally and even discovered the UK’s first Viking burial boat! On Carna the trained eye can spot much evidence of early habitation and cultivation.

The north east side of the ridge is called Bac A’Mhathachaidh meaning ‘Cultivated Bank’ and shows signs of terracing and enclosure. There are around twenty five historic dwelling sites mainly around the south eastern side where the cultivated ‘in-bye’ land exists around the old township Dailachreagain with its ancient ‘head dyke’ or main drain.

A burial ground also exists here with headstones marked from 1707 to 2008. Another settlement at Achadlic on the south west corner has some cultivated fields and several ruins.

There is also recorded ‘bait holes’ on the north and south tips of the island leading some to speculate these were in fact leading lights for shipping, the main way of travel in older times.

The bedrock of Carna consists primarily of metamorphic rock belonging to the Morar group and originally being formed up to 1 billion years ago. These were formed in shallow seas form deposited sediment then altered by low grade metamorphism from volcanic activity.

Around the edges of the island you can find numerous patches of igneous intrusion of different ages and types including Microgabbro, Basalt, Hornblend, Microdiorite and Lamprophyre. In several places the island also has various superficial deposits of gravel, sand, silt and peat formed in the quaternary period. 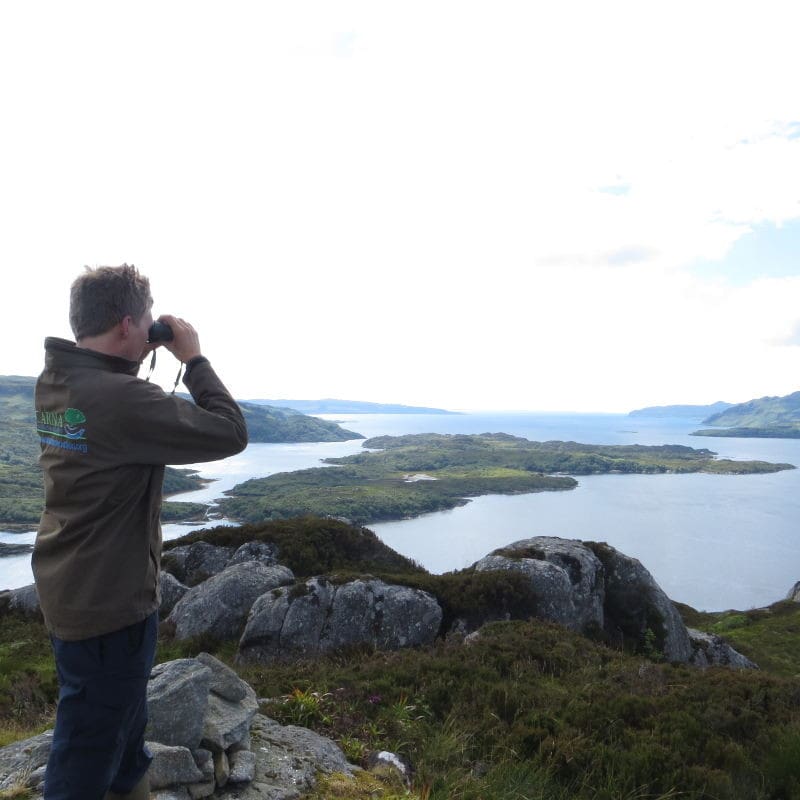